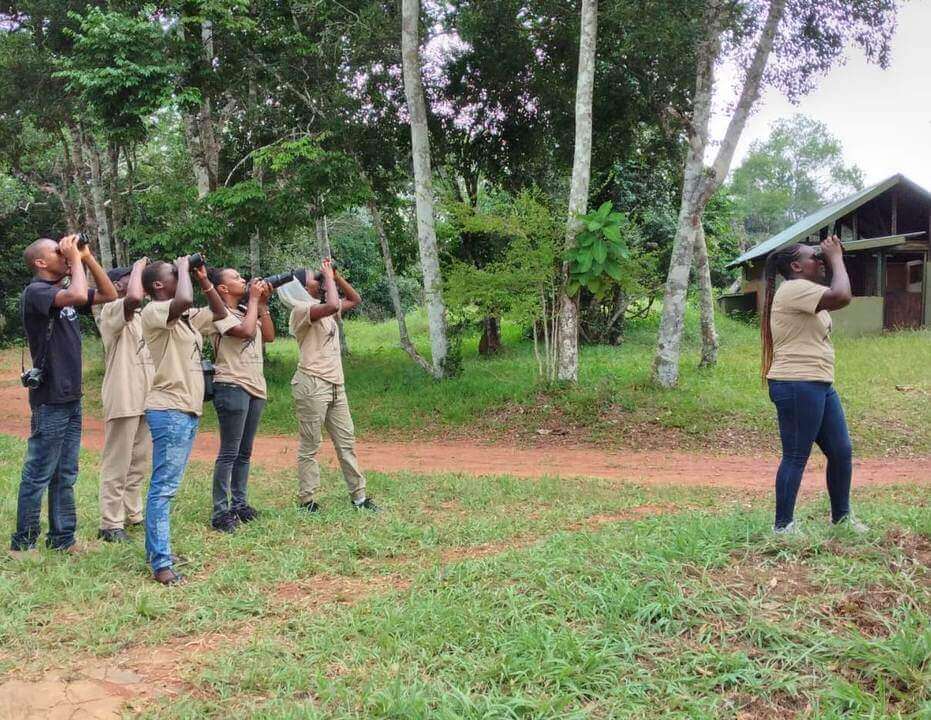 The Kenya Women Birders is a group of passionate ladies who are trained in a series of programs to equip them with skills to become professional bird guides. The trainings are facilitated by Cisticola Tours Limited as part of our sustainability projects with the aim of nurturing the next generation of female guides. Cisticola Tours partners with many friends and organizations to fund and run the trainings.

The following is a brief report that highlights the destinations and activities carried out during the three day tour supported by Cisticola Tours. On this weekend, the ladies had a familiarization tour to Shimba Hills National Reserve and study the common birds found therein and the adjacent areas. The team comprised of six enthusiastic ladies who were looking forward to learn and appreciate the diversity and abundance of the birds of Shimba Hills. With their bird watching equipment in place, they were all set to begin the trip.

The team left Nairobi at 6:30AM in a bid to beat the early morning traffic in the city. Fortunately for them, there was minimal traffic. This was a sign of a great start. Heading South via Mombasa Road, near Mlolongo area, a number of city birds were being observed, notably Speckled Pigeons roosting on rooftops, Western Cattle Egrets flying in their “V” formations as well as the cryptic Fischer’s Sparrow-Larks dust-bathing at the edges of the road.  It was interesting to note that these species have now adapted to busy towns. The team proceeded on to Emali town, for a break and refreshments. The 40 minute break at the town yielded more commonly found town dwellers, Little Swifts, Red-winged Starlings and Pied Crows joining the list.

After sharing some moments of fun and laughter, the team proceeded on enjoying the beautiful landscapes that form the Tsavo National Parks. Shortly after passing Tsavo West’s Mtito Andei gate, the team got a rare treat of the world’s largest land mammal- African Elephants! The herd consisted of about a dozen individuals busy crossing from one end of the road to another and involved about seven adults and five calves sandwiched between them. The team watched and photographed this spectacle for a few minutes before the beasts hurriedly disappeared into the bushes. After that brief encounter the team proceeded on. 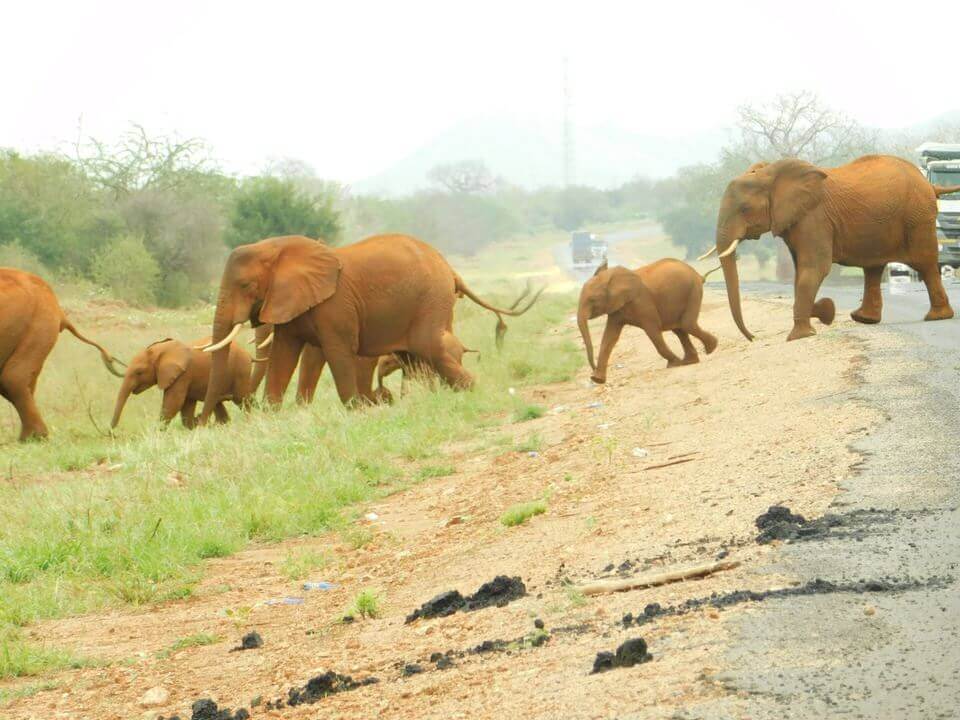 The team later arrived in Voi town where they had lunch at a local restaurant. The sun had already reached its apex point and the team was already beginning to experience the difference in weather, coastal weather being warmer than the Nairobi.

Soon the team members were on the road again. As they passed several coastal towns, a prominent bird species, the Indian House Crow and the massive Baobab tree were a common feature. The bird was a recently introduced species in Kenya and its population is spreading fast towards the inland. The team arrived at the port city of Mombasa, took the Likoni Ferry and made their way into the Southern part of the Kenyan coast.

With the team departing at 6:30AM, they headed for the gate to Shimba Hills eager to see what the forest contained. Shortly after arriving and making payment, birding began. Near the fruiting trees at the gate, a flock of Chestnut-fronted Helmetshrikes was actively searching for fruit at the canopy. The flock was soon joined by a trio of Green-headed Orioles who perched on a branch briefly then took off again. Eastern Nicators and Green Barbets were also calling in the distance.

Soon after they headed towards the Sable Bandas circuit and en route were treated with a flock of some Crested Guineafowl along the road. The flock consisted of adults and immatures, frequently making low contact calls as they foraged together. Shimba Hills National Reserve is always a great site to spot this forest species when on a birding safari in Kenya. 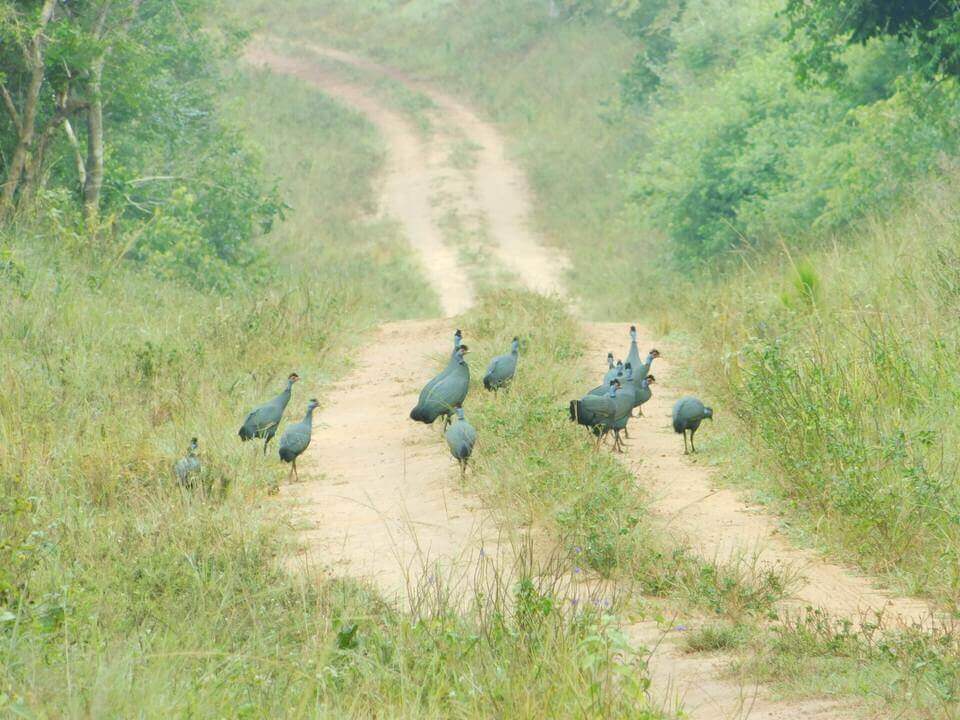 There is a small stretch of wooded grassland on the way to the Sable Bandas; and as they drove through, the ladies made additions of Yellow-throated Longclaw, Violet-backed Starlings and Little Bee-eater. At the Sable Bandas, the team stopped for a while and walked along the camping grounds. Little Yellow Flycatcher, Mombasa Woodpecker and Black-headed Apalis were among the highlight birds that the ladies enjoyed watching there.

The women birders then left for the Sheldrick Waterfalls view point. The drive was filled with beautiful landscapes featuring rolling hills in the distant and large tracts of open habitat. White-throated Bee-eaters and Barn Swallows flew along the road too.

At the observation point, the team got off and enjoyed lunch with a bird’s-eye view of the reserve. Notably, a male Common Rock Thrush had perched on a bare twig unperturbed by the ladies’ presence.

After lunch, the team embarked on more game drives making good sightings of mammals such as a male Bushbuck, Cape Buffalo and Common Warthog. By this time, bird activity had began decreasing due to the hot conditions. Before exiting the park, the Kenya Women Birders decided to check out at the gate environs for possible new additions; and got one more- a Common Bulbul!

The Shimba Hills Lodge route added Black-crowned Tchagra, and Yellow-fronted Canary. Further forward at the Marere River, a duo of Palm-nut Vultures flew above heading along the river and perched on a bare tree beyond. Little and White-rumped Swifts were also observed actively searching for aerial insects.

Afterwards the ladies left the forest and headed for the coastal wetland habitat to study the birds at Ukunda Beach. The team managed to add Sooty Gull, Common Sandpiper and Whiskered Tern.

The team left in the early hours of the morning and began the journey back. Crossing the Likoni ferry and the coastal city of Mombasa, they continued North to Mackinnon Road town where they had breakfast. House Sparrow, Indian House Crow and Red-winged Starlings being the most common species. Being on a Sunday meant that there was little traffic on the highway which gave good opportunities to conduct roadside birding. A few kilometers from Vacani Resort (near Voi town) were good sightings of Bateleur, Slate-coloured Boubou and Pin-tailed Whydah. The habitat was short-scrub and bushland; where dry country birds were in plenty. A Tawny Eagle on the side of the road was perched well and gave good time to observe its behaviour. Due to the ever-increasing heat, the eagle was panting in an attempt to cool off. 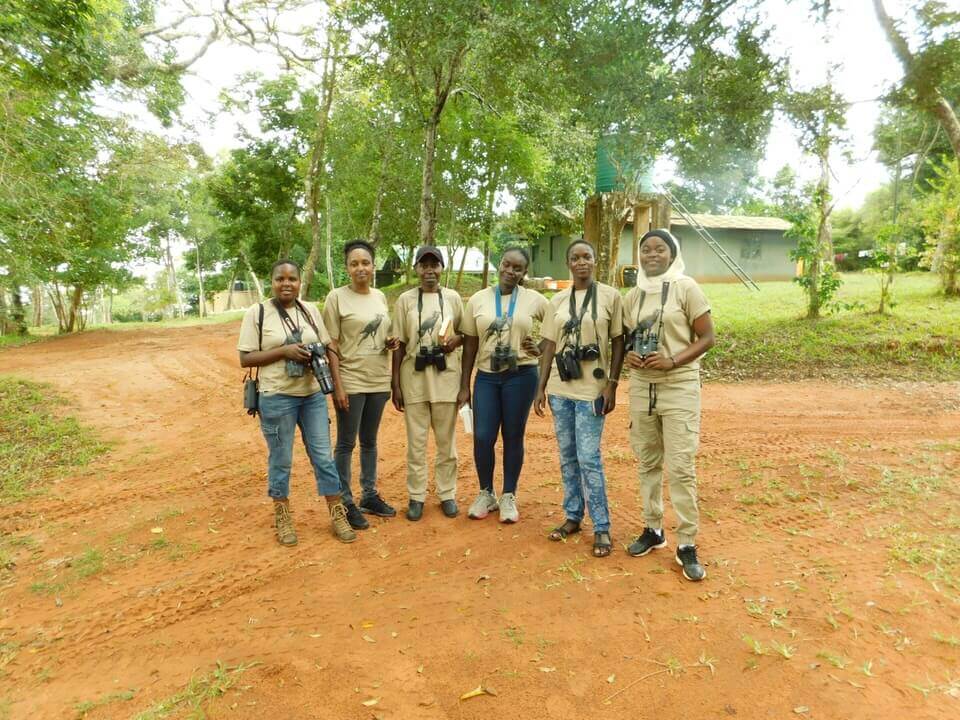 The team then proceeded on and briefly made a stopover at Hunter’s Lodge. The lodge is reputed to be a great birding hotspot to visitors plying the Mombasa Road. They were met by a huge heronry of Black-headed Herons at a tree located near the artificial wetland in the lodge. Similarly, male Eastern Golden Weavers were busy weaving their nests on some reeds in the same wetland. Additional sightings at the lodge were Thick-billed Weavers and Malachite Kingfisher. The team then hit the road and headed back to Nairobi.

A Report Of The Kenya Women Birders Training Held At The Mount Kenya Eco-Resource Center From 13th – 15th September 2019 A Birding Day Tour in the Western Mt. Kenya Forests

A Birding Day Tour in the Western Mt. Kenya Forests