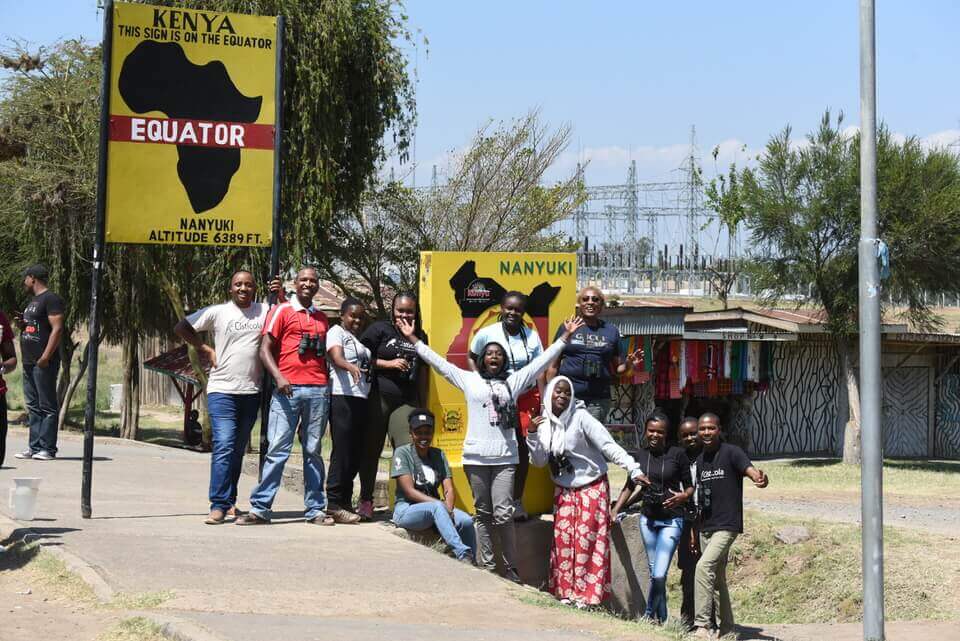 This was the first training held specifically for the Kenya Women Birders. The Kenya Women Birders is a new club whose aim is to nurture the next generation of female birders in Kenya. The club was launched at a spectacular event that was held at Ford Hall, Nairobi National Museum, on 29th March, 2019. The launch event was supported by the National Museums of Kenya, Wildlife Clubs of Kenya, Eastern Africa Primate Diversity and Conservation Program, Youth Conservation Awareness Program, and Cisticola Tours LTD. Over 72 people from Kenya and Uganda joined the launch event; representing Universities, Birding Clubs, Conservation NGOs, Tour Operators, Individual Birders and Guides, Media, and many more.

One of the main commitments pledged by Cisticola Tours LTD, at the launch event, was to facilitate trainings for the club in the coming months and further years. In light of this, the company fundraised for the first training held in September, 2019. At present, the club has twelve members, all of whom were eligible for the training, although some were occupied with other responsibilities.

The training involved eight ladies from the club. The training venue, Mt. Kenya Eco-resource Center, is located within the expansive Gathiuru forest of Mount Kenya and this provided a natural and ideal setting where practical birdwalks were conducted.

Different methods of training were employed, including use of lectures, field guides, visual aids such as power point presentations and films; as well as student discussion groups. Key topics such as Birding basics, Binoculars choice and use, Bird Anatomy, Birds of Kenya, Bird Taxonomy, Bird Feeding, Bird Migration, Colours and Patterns, and Breeding were taught and short films illustrating these topics also included.

The program was designed in a practical format and had birdwalk sessions early in the morning before breakfast and in the early evening after the four o’clock tea break.

At the end of the training, certificates were awarded to the participants for successfully completing the training and branded T-shirts issued to all the ladies. 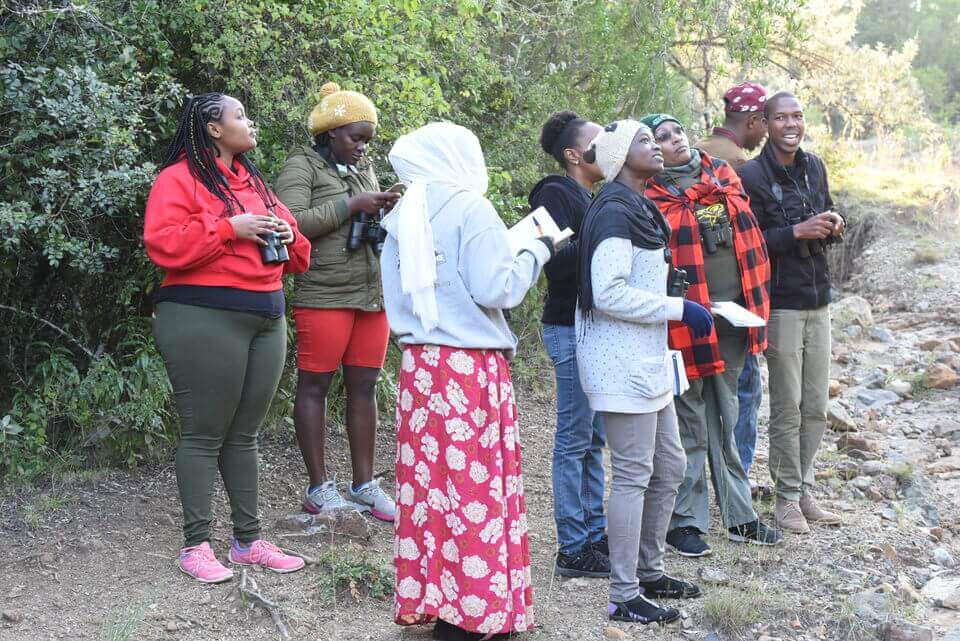 Upon arrival, and after meeting the hosts, the training exercise kicked off with a briefing about the operations of the eco-resource center. Later, participants were briefed about the targets of the whole training, highlighting the various aspects of the course outline and what the ladies were expected to learn during the training.

After a tea break, the first talk on basics of birding commenced. Various topics of the day were taught with the program accommodating short breaks for the students to exercise the various concepts taught.

An afternoon birdwalk was done around the resource center grounds with the team spotting some exciting species such as Hartlaub’s Turaco (and East African endemic species), Silvery-cheeked Hornbill and Common Bulbul. A Cape Hare hurried off for a hideout nearby as we birded along and thus added to the mammals list.

Later, after the participants had enjoyed their dinner, they left for the accommodation hotel to relax after the long day. Everyone was excited and looking forward to the next day’s training.

Departing the hotel at six o’clock in the morning, the team headed for the training center. The theme for the morning’s birdwalk was on how to take notes while in the field, noting such aspects as time started, weather, species records, etc.

En route, the birders got an opportunity to spot a slightly injured Dusky Nightjar (Caprimulgus fraenatus) on the ground. With nightjars being a difficult group to tell species apart, the trainees were taught on the key identification features for identifying them by looking at different aspects such as tail and wing shape, distribution and range of each species as well as colours and patterns on different parts of the bird. 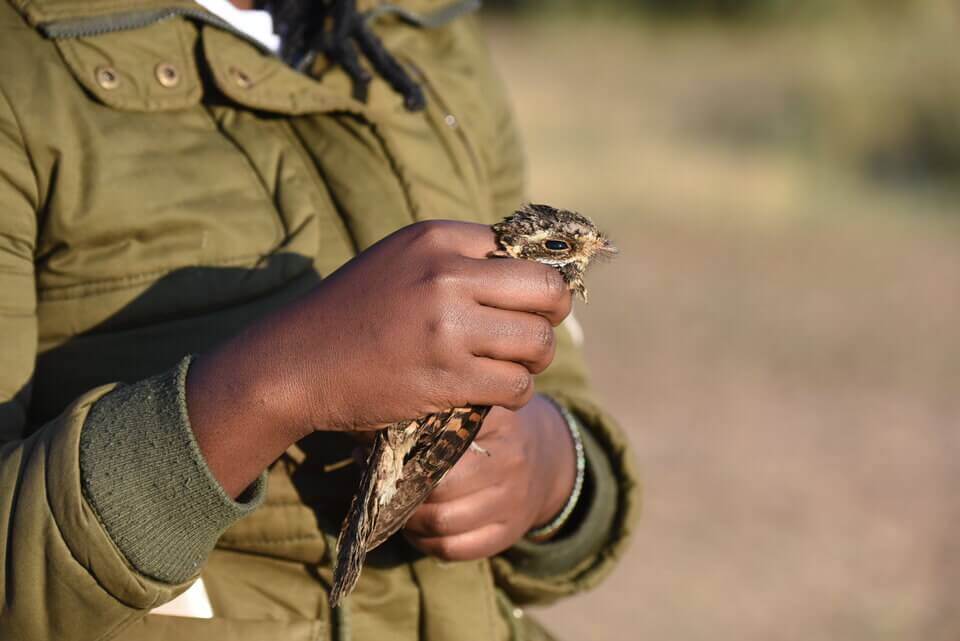 With light conditions being perfect, Mount Kenya was well visible in the background, being lit by the morning sun. Other bird species that were spotted that morning included the Northern Fiscal, Baglafecht Weaver, African Golden-breasted Bunting, as well as a flock of Red-cheeked Cordon-Bleus. After the birdwalk, the team proceeded to class.

Various lectures for the day were given with short films and breaks in between. In the afternoon, student discussion groups were formed with the students handling various research assignments issued, for them to present later in class.

During the afternoon birdwalk, the main theme was to train the students on the ethics to observe while birding and professional field craft. The points mentioned, among others, included the right dress code, walking and stopping for some time to listen as well as showing birds to the other team members. Birds added on this walk included the Yellow-whiskered Greenbul, Grey-backed Camaroptera and a pair of Hadada Ibis. As the light was fading away, the evening birdwalk was crowned by a Verreaux’s Eagle-Owl flying past above us and landed on a nearby tree.

Having had a successful training and practical birdwalk for the day, the team decided to wind up the day’s activities and head for the hotel, ready for the next day.

The morning birdwalk began on a high note with birders having learnt the various identification techniques by now. Learning bird calls and songs was the major theme for the day. Identifying the birds had now become relatively easier since the birders were able to work out the particular species using the skills taught for the past two days.  More bird species were added including Chin-spot Batis and several Black Saw-Wings.

Afterwards, breakfast was served and the lessons commenced. The lessons were tailored to enhance what was observed in the field so that the students could understand better what they were seeing in the field.

A mid-morning session had the team visiting the nearby Gathiuru forest in order to identify and learn about the moist-forest bird species. En route, the trainees made a quick stop at the Equator line near Nanyuki to learn about the imaginary line. The team also enjoyed taking some photos here, before embarking on the journey to the forest. 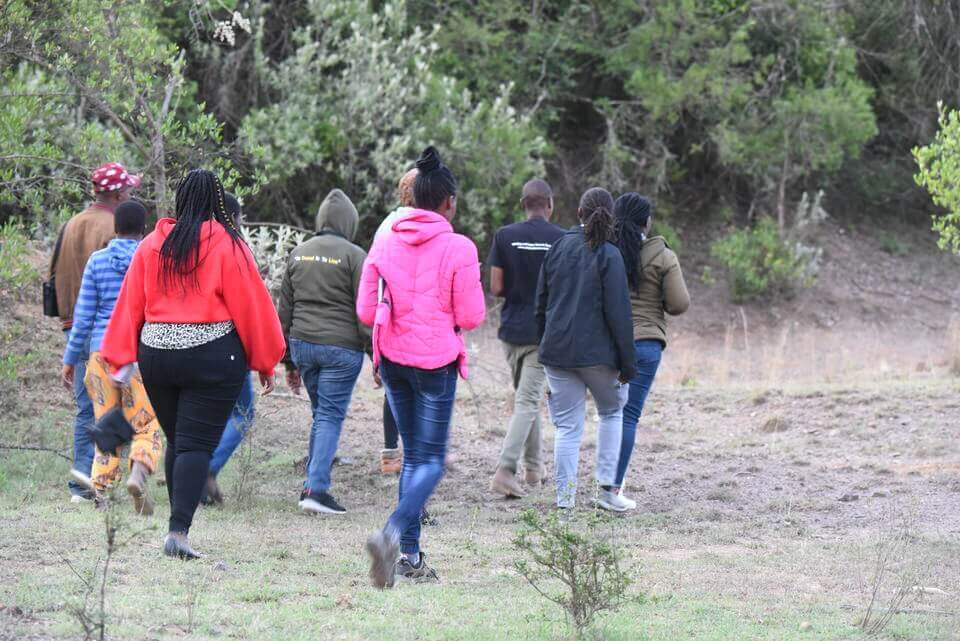 Various species of sunbirds were the main highlight of the birdwalk. The birders were also lucky to spot one of Kenya’s 12 endemic bird species, the Kikuyu White-eye (Zosterops kikuyuensis). After a few hours of birding, the team returned for lunch.

Having completed the training, it was time for the team to head back for Nairobi. Before their departure, each of the ladies was awarded with a certificate for successfully completing the training course.

With the team of women birders, it is envisioned that the avian tourism industry will see more women in the birding field that was previously dominated by male guides and also help in realizing the Kenyan government’s goals of achieving gender equity in all sectors of the economy. 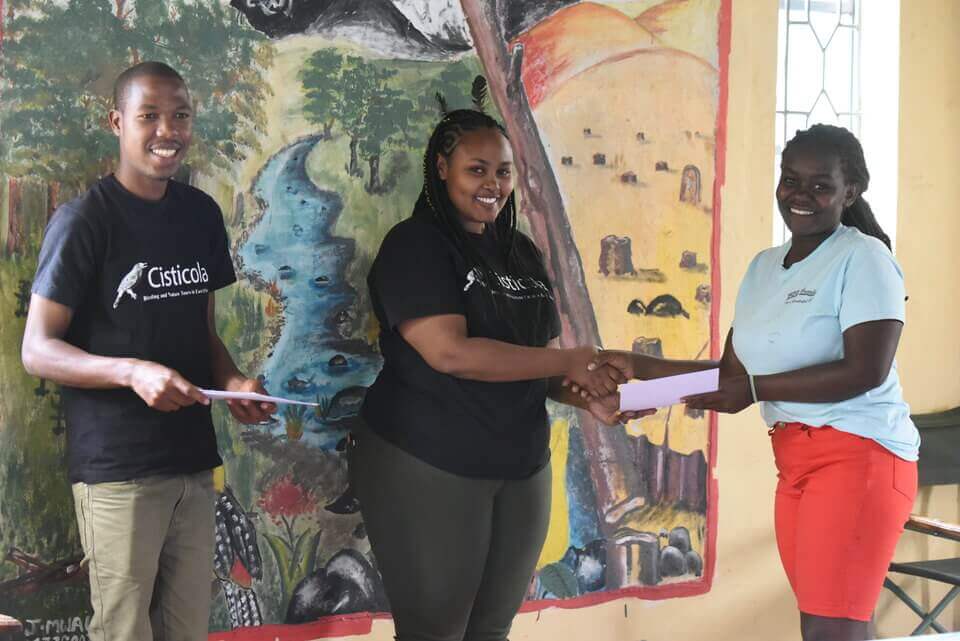